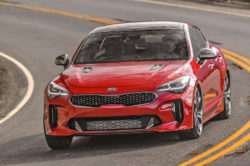 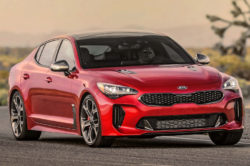 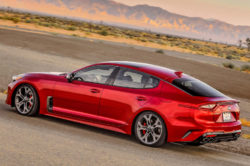 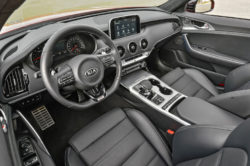 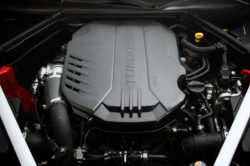 Kia showcased the first Stinger concept a while back but not many people thought they were ever going to build it. However, a few months ago they stunned everyone when they released the car on the market. The new model comes in two very different versions. The base model is a rather efficient but fun to drive sedan while the 2018 Kia Stinger GT is the more powerful version of the car. Kia said the latter has its crosshair set straight on the BMW 440i and the Audi S5. Even though this may seem like a daunting task, it looks like the Korean manufacturer may have something special on their hands. Unlike with their most other cars, with the Stinger Kia took a few interesting steps. They hired BMW’s ex M-division head engineer. He was given the task to make the Stinger as good as it looks.

Even though there are still a few interesting questions to be answered, it looks like Kia may have just did it. For starters, the Stinger GT uses the same architecture as the Genesis G70. However, in order to be better suited for this application, the wheelbase has been elongated slightly while the track width is larger too. Kia also spent a lot of time on the Nurburgring in order to make the Stinger GT as good as it gets.

The tuned the suspension system, and the car’s brakes, in order to be great on bumpy and smooth roads. While the car is not perfect, as it might feel too harsh at times, it is definitely a car worthy to become the class leader. The only real drawback we see with it would be the car’s unusual steering rack. While this is highly accurate, it is a bit disconnecting from the road which definitely hurts the driving experience.

They already released the 2018 Kia Stinger GT a couple of months back and the car is already available for sale in most parts of the world. On the US market the car starts at a shy under $40,000 which is mostly in line with its main competitors. The higher end versions cost only slightly more so the value for money remains quite good too.

The 2018 Kia Stinger GT looks like nothing else on the road and that’s always great to see. The car features a really expressive front end with swept back headlights, Kia’s new corporate grille as well as large bumper intakes. There is a large splitter in place as well while on the hood they installed heat extractors.

The car also features a few interesting inserts on the sides and at the back but unfortunately these are there just to look cool and nothing more. Like with the regular model, the GT features the same coupe-like roof line which allows the Stinger to stand out from its rivals.

While the exterior is unique, we can’t really say the same about the interior of the 2018 Kia Stinger GT. The car looks, and feels, a lot like a BMW. While this is not exactly a bad thing, we hoped Kia would have done something a bit more unique.

Even so, the center stack is well laid out and everything is where you’d expect it to be. Also, the car’s driving position is nice and low while the instrument cluster and the steering wheel allow the driver to feel like in a plane’s cockpit.

While there are multiple engines available with the Stinger, the GT only comes equipped with a 3.3 liter V6. This is a twin-turbocharged unit which can develop a rather impressive 365 horsepower and 376 lb-ft of torque. Unfortunately a manual transmission is unavailable which would have made things a lot more interesting.

Even so, the available 8 speed automatic is fast and smooth and it will please pretty much everyone. As standard the car comes with rear wheel drive but there is also an option all wheel drive system in place. No matter the case, the car will hit 60 MPH in around 4.6 seconds which is quite impressive for this class. The top speed is also a highly impressive 167 MPH which makes it the fastest sedan at this price point.

4.8 After years of rumors the 2018 Tesla Model 3 has been finally revealed a few days ago. Even though …