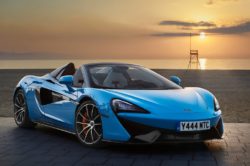 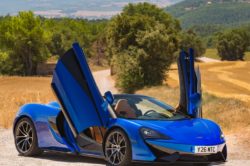 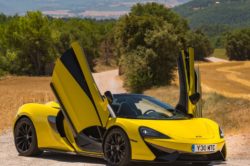 The 570S is one of McLaren’s newest models being revealed back in 2015 and it didn’t change much since. However, more recently the manufacturer released a brand new version of the car. This is the all new 2018 McLaren 570S Spider which, just like its name suggests, is the car’s hard-top version which comes with a few goodies over its removable roof. This is the natural evolution for a car that sold quite well up to this point. However, the new Spider is not perfect but more on that next.

Why isn’t it great?

The price for a base version of the 570S Spider is little under $210,000 which is pretty much on par with most of its regular rivals. The big problem here is McLaren’s own 650S Spider. Because the car depreciated so badly, a mildly used version of this can be had for the same price, or slightly lower, as the new 570S Spider which is an inferior car. Luckily though it looks like most people are going to buy the lesser model as it is said to offer a far better and more entertaining driving experience.

The 2018 McLaren 570S Spider is based on the same carbon fiber tub as the coupe version of the car. On top of that, unlike the one of the 650S, the tub used on the 570S has been not only designed but also built by McLaren. Thanks to that it should be slightly more rigid as well as lighter. Also, thanks to the fact the chassis is so strong, the convertible version is not that much heavier than the coupe. This should retain most of the performance unchanged which has been the problem with convertibles up until recently.

The car’s running gear has also been retained while the brakes are the same standard carbon ceramic rotors as before. While these are great for stopping, they don’t really offer any kind of feedback which is mostly due to their construction and heat requirements. In order to work as they should, these brakes need massive temperatures which are not attainable on the street so they won’t feel as good as a steel rotors. The steering is also the same electronic system as before which can adjust the ratio on the go. This not only creates a great car to drive but it also allows it to be great on the street and on the track.

The changes have been made to the car’s top part. Here the 570S Spider boasts a modular hard-top which can fold or unfold in a matter of seconds. The engine cover is also different. Instead of being covered in glass, the engine now boasts a slotted cover for added ventilation and a slightly more aggressive look than the coupe.

If we don’t take into consideration the removable roof, the 2018 McLaren 570S Spider should feel pretty much just like its coupe counterpart. The car still offers a really minimalist-looking dashboard, a digital instrument cluster as well as a 7-inch portrait-mounted infotainment system. While this offers everything one would want, it doesn’t have the best screen on the market so it might feel bad in comparison with what is currently available on other super-cars.

The 2018 570S Spider boasts exactly the same engine as its coupe counterpart. The car offers a 3.8 liter twin-turbocharged V8 which is good for up to 562 horsepower, more than enough for pretty much anyone. This engine sends all of its power to the rear wheels via a 7 speed dual-clutch automatic that has been around for a while. Both of them have been actually built in cooperation with Ricardo, so they do work great together. The car will hit 60 MPH in close to 3.0 seconds and it will run the quarter mile in just under 11 seconds which is already hyper-car territory. The best part about the Spider is that it will do the same top speed as the coupe at 204 MPH which is quite impressive.

4.6 Skoda has been VW’s value brand for a while now but this didn’t stop the Czech manufacturer to release …