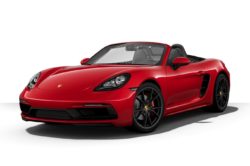 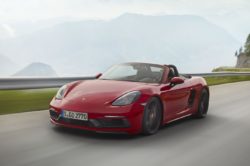 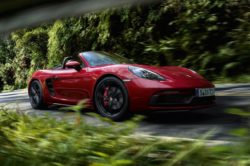 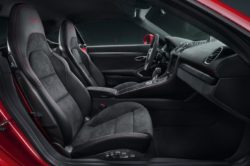 What’s the sweetest spot in any Porsche model’s lineup? GTS for sure. But, in case of Boxter and Cayman, the story is a bit different. You see, they lack top the shelf Turbo and Turbo S models, so GTS comes as a pinnacle of the current 718 range if we put aside special Spider and GT4 versions that are based on pre-refresh models and disputably available now. So, does the GTS arrives with same allure when it comes as a pricing peak, rather than sweet middle? Let’s check that in case of newly arrived 2018 Porsche 718 Cayman GTS.

So, finally, GTS models join the 718 line and they bring some delicacy along. They again come with more power than S version, from whom they borrow the engine unit or turbocharged 2.5-liter H6 in this occasion. That means that Cayman GTS boosts 365 hp, which is 15 hp more than S version, and 8 lb-ft of torque more (317 in total) if you go with 7-speed dual clutch PDK as manual keeps the original 309 lb-ft.

That also means that power is up by 25 hp compared to previous GTS model, while 0-60 time is down by half a second stopping at 3.9 seconds (current S model takes also 4.4 seconds). Keep in mind that real-world acceleration figure is probably going to seat below that by some tenth giving Porsche’s usually conservative claims which also plagues officially stated times for previous GTS and current S model.

BUT THAT’S JUST A TINY PART OF THE STORY

Yes, GTS label is not just slightly more power compared to S version, it is rather the whole bundle of other things too. So, you’ll get adaptive dampers, torque vectoring, Sport Chrono pack, sport exhaust, special seats and 20-inch alloys for no extra cash. And all those things are heftily priced boxes waiting to be checked on option’s list. So, paying $80,850 for 2018 Porsche 718 Cayman GTS version doesn’t sound so silly right (?), giving that opting for all those performance delights with S version will surely offset twelve grand price difference between the two. But, if you tick all the mentioned extras with your S version, you’re still not getting a GTS. And it’s not just because of that 15 hp extra…

As always, GTS brings its own visual treats. It arrives with special and more aggressive front bumper, tinted lights front and back, including turn signals, darkened badges, and black painted exhaust tips.

Even interior gets its fair share of the deal. We have GTS label stitched on the mixed leather-Alcantara seats, and same Alcantara covers armrest, steering wheel, and door panels, while red contrast stitching spreading all over the cabin acts as pure content.

So, despite GTS model sits atop of “wallet hurting” pyramid in Cayman’s lineup, it brings so much stuff to be relished, that to us is as sweet as the usual middle spot that occupies in case of other Stuttgart’s products. If it’s not for you also, don’t worry, if new GT4 appears it will slide in the middle once again…