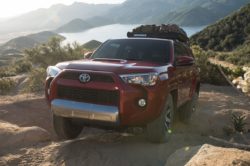 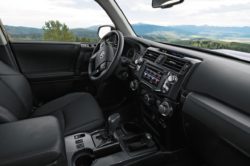 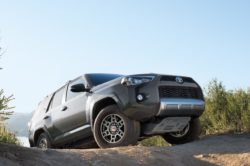 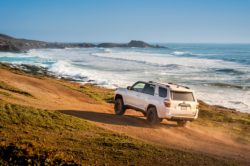 The current generation of 4Runner debuted in 2009. Next year Toyota managed to attract 46,531 buyers with it. Last year? 111,952 persons went for an eight-year-old SUV. Something is happening here as similar sales boost was also experienced by Wrangler in recent years. It seems that after people expressed complete carelessness toward SUVs without crossover part of the story, and after almost all brands threw white towel in the mid-size segment, a flame of cravings for true ruggedness is reignited once again. So, what does 2018 Toyota 4Runner has, making it still so viable choice?

Those two traits are its main virtues and main culprits for those sales numerals. Complete boxiness and simplicity of the archaic shape along with elevated stance cry “toughness” out loud, but that coupled with weird cartoonish manga-styled fascia, generate charm for some reason. Sure, it is hard to attach beauty adjective to it, especially compared to any modern mid-size crossover, but it is definitely different for present times and it seems to work for it.

As for being fearless, let’s just note that there is no any place which Wrangler can reach, being unattainable for this Toyota. Besides ladder frame and solid rear axle, it comes with a bunch of off-road gizmos such as the 4WD system with low-range gearing, locking differentials, front sway-bar’s ability to disconnect, all the way to the stuff like Bilstein dampers with remote reservoirs and Eibach springs in the case of hard-core TRD Pro model.

4Runner is an off-road beast that will take you through any Mother Earth’s calamity thrown in front of you or the one you artificially pushed it into. But civilized areas are not its natural habitat. So, accordingly robust and capable ladder frame chassis and solid rear axle act ungainly and clumsy on the paved roads, especially compared to monocoque underpinned crossovers with independent rear suspension.

Still, for the body on frame SUV, 4Runner is decently composed, especially next to Wrangler, while steering is interestingly precise. As for the interior, it is robust as 4Runner’s nature is. Plastic is cheap, the design is simple, buttons and knobs are dated and huge and 6.1-inch infotainment is small by modern standards.

Yet, it will also prove durable, very spacious, generous with outward visibility and unexpectedly quiet. In fact, all bad stated is in comparison to mid-sized crossovers, while when pointed toward only direct rival or Wrangler, whole deal might even turn to lavish.

Old-school approach to the exterior design and cabin reflects itself under the hood too. Only available 4.0-liter naturally aspirated V-6 producing 270 hp and 278 lb-ft paired with five-speed automatic could sound comical these days. “Sharing same badge” Highlander gets 25 hp more from half-liter smaller displacement and three speeds more for the shifter. Furthermore, Ford’s Explorer jumps to 365 hp with two turbos and Honda’s Pilot hides 9-speed transmission underneath. Still, 4Runner takes 7.5 seconds to 60 mph which is completely decent and even above figures posted by Atlas or Edge when it is powered by non-turbo V6.

Still, a visible age of the petrol mill, still featuring port injection, along with lack of transmission gears, take its toll on fuel efficiency. 18 mpg combined is just dreadful compared to anything in the mid-size segment, apart from Wrangler which posts the same figure. So, 2018 Toyota 4Runner is far from being confused, it is in agreement with its essence and it knows well its purpose in this world. It doesn’t hide anything or pretend to be something else, making easy for you to understand what are you getting for $34.7k for a start. Ultimate TRD Pro model and its $42.8k price tag are even more straightforward for your comprehension.

Honda’s Clarity project has been around since 2008 while the current generation has been available since the end of 2016. …