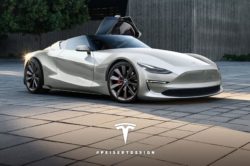 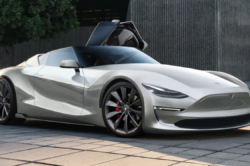 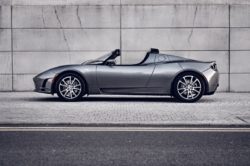 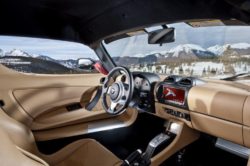 Released in 2008, the Roadster is the car that allowed Tesla to build the Model S which basically kick-started the company. Even though there are rumors and details about a new Roadster since the early 2013, Elon decided not to include the car in Tesla’s future plans. However, it looks like this may not be true. When asked about a new model, Elon said that a Roadster is definitely a possibility and it looks like it may be their fastest car yet. He tweeted a couple of times that the Model S will be their fastest model until the release of the 2019 Tesla Roadster. Even though this is still not a confirmation, we are positive Tesla is working on a successor for the car that started it all.

Even though nothing is for certain at this point, it looks like the new Roadster may not be built on a bespoke platform. Instead the car is expected to be based on Tesla’s latest technologies but it will boast a unique chassis. Most of the car’s electronics are likely going to be shared with their future models. This means the Roadster will be far less costly to build than before. Thanks to that the car should provide a good amount of performance for not much money. In fact some suggested the Roadster may start at less than $100,000. If they manage to do that then the car should have no problems becoming one of the most desired sports cars on the market.

The predecessor of the 2019 Tesla Roadster was built on the same platform as the Elise and it even shared some body parts with it. So far it looks like this is not going to be the case with its successor. Even though it’s not official just yet, it seems the new car will boast an entirely new design scheme. Most suggest the car will feature a classic grand tourer look with a long hood and a pushed back cabin.

This would allow Tesla to basically give the car multiple personalities and sell it not only as a sports car but also as a high performance grand tourer. Its overall design scheme is likely going to be somewhat similar to their other vehicles. Expect a grille-less front end but likely more aggressive headlights and a more muscular body. The car is likely going to feature just two doors as well as a removable roof. We do hope they will give it an electric roof as at this price point it would be well deserved. Given its name, it is safe to assume the Roadster will offer just 2 seats. However, this may change in the future ass its highly modular platform would allow them to spawn other vehicles as well.

How fast will it be?

So far Elon responded to two different questions about the upcoming 2019 Tesla Roadster. It seems the car will be able to accelerate to 60 MPH in as little as 2.0 seconds on street tires with no other modifications. On top of that, it seems it will be their first model to get under 10 seconds for the standing quarter mile. In order to achieve these numbers the Roadster will have to boast some serious power.

So far it looks like most rumors suggest the car will be all wheel drive and that it might feature two high powered electric motors similar to what the Model S has on its rear axle. These would give the Roadster in excess of 700 horsepower and 1,000 lb-ft of torque which should get it close to that number. Its battery will likely be a new generation lithium-ion unit capable of sustaining all that power draw.

Hyundai started selling the current Veloster back in 2011 and they didn’t change much about it since. Even though there …