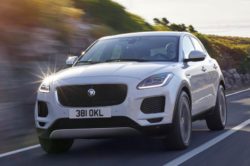 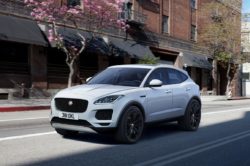 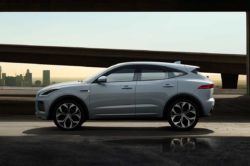 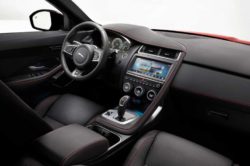 The E-Pace is an all new car that has been first revealed a couple of months back. The car is set to become Jaguar’s new compact luxury crossover in the US and Europe. While at first many rumors suggested the car was going to be based on their rear wheel drive platform, it seems that this wasn’t true. Instead, the new 2018 Jaguar E-Pace is actually based on the same platform as the Evoque. This means that at its core the car is front wheel drive. This isn’t exactly a problem though as the E-Pace received a lot of attention from Jaguar in order to be at least as good to drive as their other cars.

For now Jaguar announced the car is going to start from around £28,500 in the UK while in the US it will be closer to $40,000. The big price difference is because the cars aimed for the two markets will come with vastly different engines and features too.

Even so, the E-Pace should still be well worth the money as most of its rivals don’t really offer the performance or the looks the tiny crossover has to offer. So far it seems the car is going to become available for sale in the upcoming months and the price doesn’t look like it is going to change until then.

Likely the best part about the new 2018 Jaguar E-Pace is the way the car looks. Unlike most other cars in this class, the E-Pace has its own unique character. In the front it boasts a large and imposing grille, huge side-air intakes as well as a bumper that would easily fit a sports car.

The headlights are swept back while the bulky wheel arches and hood lines make it stand out. The rear of the E-Pace boasts design cues from the F-Type sports car offering nearly the same tail lights and a really aggressive bumper too. With this model Jaguar will also release a sports version with even more aggressive bumpers, larger wheels and unique colors.

All cars will come as standard with a 10-inch infotainment system running Jaguar’s latest software. So far this proved to be average but the better hardware in the E-Pace should change that. Thanks to its transverse engine the car is able to offer a lot of space inside.

There is plenty of headroom and legroom in the back despite its coupe-like roof line while the low dashboard gives the driver a nearly perfect view out. The First Edition model will come with unique features such as red stitching, a unique leather-wrapped dashboard and also a 12.3 inch instrument cluster which will likely become available on the other models later down the road.

In Europe the 2018 Jaguar E-Pace will come as standard with a 2.0 liter turbocharged inline-four diesel offering 148 horsepower. This will come with front wheel drive and it will be the only one offering it. Further up the range there will be a 178 or a 237 horsepower diesel. A 2.0 liter turbo-four gas engine will also be offered. This will provide 247 or 296 horsepower. All the other engines will be mated to a 9 speed automatic and an all wheel drive system. Some markets will also receive a 6 speed manual for the mid-range diesel but it seems this will be offered only in Europe. The US market will only receive the two petrol engines but Jaguar will offer here a new AWD system for the range-topping model. This will include a torque-vectoring system able to send most of the torque to either the front or rear wheels which should give the car a much better set of driving characteristics.